Mr. Grumpy Box of Crayons and a Little Wiggle

The final theme for Spirit Week in middle school was TV characters. Again, my friend Michele and I masterminded what we believed would be the most epic of all ideas for TV character days not only at our kids' school but quite possibly ever in the history of mankind. What we didn't know was that there were other moms with some crazy ideas of their own.  After kicking around a few ideas, we asked our boys what about being the international children's Australian music group sensation, The Wiggles? To our surprise, our guys said yes!

I was pleased that Ike was willing to be a Wiggle. He is my subdued child and far more self-conscious. Not only did Michele's son and my boy decide on being The Wiggles but they recruited two of their buddies to be the two remaining band members! Michele and I went full-force with our plans. She bought t-shirts for all four of them and created The Wiggles iron-on transfers and expertly applied the logos to the front of each shirt. 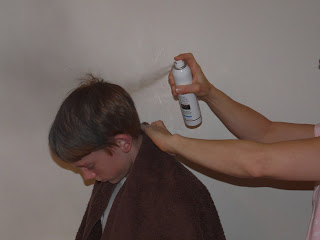 Then after lunch one day, Michele and I found black hairspray. When Ike came home, he was eager to try it out. I took him outside as to not make a mess indoors and put a few squirts of the black hairspray on his hair. His lovely orange hair began to turn the ugliest shade of gray I'd ever seen in my life. It turned a thick, lifeless gray and to make matters worse, the hairspray became powdery on his head. We also probably destroyed another ozone layer in the process. Sorry about that. 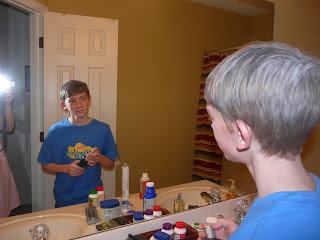 The next morning Isaac woke early. After he put his Wiggles t-shirt on, I placed him in the tub and began lacquering his hair. A thin film of powder covered his head. Before my eyes, my sweet 12 year old son had turned into an aging Wiggle. I gave him some dark eyebrows with my eyebrow pencil and once he got the blue plastic recorder I bought at the Dollar Tree, Ike's transformation was complete. Ike trepidatiously walked into the sixth grade hall searching for his aging band mates. Their moms had also bought the hairspray and they all complained about the gross stuff in their hair in the corridor. 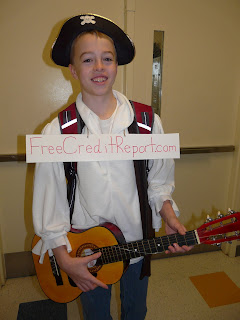 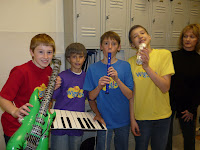 The hallway exploded with energy. One student was the Cookie Monster and he passed around cookies to everyone he saw. Another guy was the FreeCreditReport.com guy complete with a little pirate outfit and guitar.

But I think my personal favorite TV character was Billy Mays from OxyClean!  This student was a hoot because he absolutely personified spokesman Billy Mays. He had a penciled-in beard, toted around his OxyClean bottle and recited the entire OxyClean schtick! 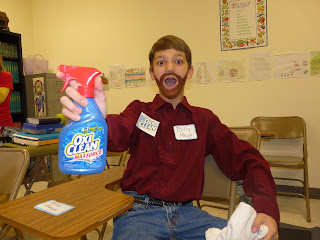 Ike said everywhere Derek went, he was trying to sell his product! Smiles and laughter, cookies and cleaning products, music and merriment, what could possibly be better!
And then there was Aaron. The grand finale of high school Spirit Day was Crayon Day. Poor fella was clueless about what to do. 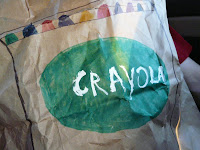 After a long night of homework, Aaron began working on his costume after 11pm. Ingeniously, my middle OS turned a grocery bag inside out, grabbed some markers, a bottle of White-Out and my resourceful child became a box of Crayons.
With little sleep, Aaron was pretty unpleasant the next morning. He was Mr. Grouchy Box of Crayons even in the car as these pictures clearly demonstrate. 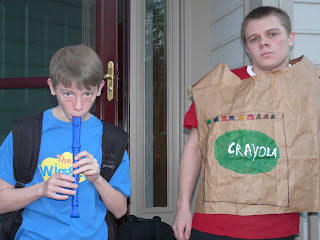 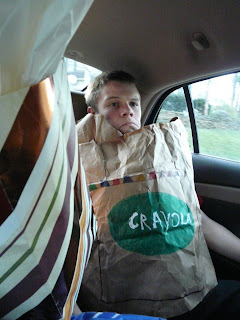 It probably didn't help that his annoying parents took a million pictures and found the whole thing terribly amusing!
I miss Spirit Week but am kind of glad things are back to normal...I'm already thinking about next year's plans!
Posted by MyAwesomeOliveShoots at 2:42 AM

Would you believe Billy Mays made my blog today, too?? How funny is that!? :-) Spirit Week sounds like it was full of wonderful memories that, thanks to the boys' dear mother, shall live forever in cyberspace! :-D

The little free credit report guy almost made me wet my pants. (Which I seem to be saying a lot lately...)

I don't know what would cause any humane individual to make their son dress as a wiggle for anything.

Nate, I think you are jealous because I made your brother into a wiggle and not you. When you come home, Mom will make you a nice, little costume, promise!

MyAwesomeOliveShoots
This is the life of a former strident existentialist, agnostic feminist who came to know Christ. I'm a wife, writer, and mama of three sons ages 22, 17 and 15. My oldest son is a 2012 graduate of the United States Military Academy. My lifelong goals are to raise three sons who love and serve Jesus their entire lives and also put the toilet seat down after using it. If I do that, my work here on earth will be done.